Details of route :- Route and timing

Woke up at 6:30am and was ready for the long ride.
Left from the spot at the government guest house at beggar’s home at 7:48am. I kept it cool at the start because I know if I push hard early then I’ll lose energy inurn losing motivation to ride long. Cold breeze meant that it was gonna be a hard day. The course to Tarapur was rolling hills with a slowing section of the toll. Two water bottles and a sweet coconut bar was there so that I didn’t get bonked. The starting 7.5km were smooth and careful ride as I was still in town and not on the national highway.
The only thing I had to worry and which would make my ride miserable was puncture. I had suffered a lot of puncture before which truncated my ride and infuriated me. But that day I felt confident that it won’t happen. It went very smooth till I reached my 25.5km time check which showed 50minute which was quite less than the timing I had in the 25.5km time trial at the same route at around 47min but this was different ride. I felt good seeing the timing but wanted to increase my average speed just a little so I pushed little harder but not too hard. It was sensible ride then through the rolling hills, sensibly changing gear at uphill and speed the downhill to achieve momentum. 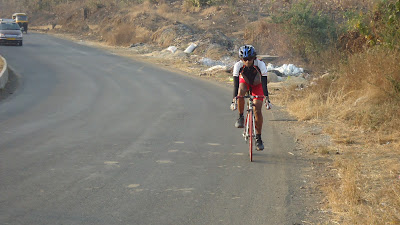 Then I was in a new area, the place which I had never seen that was after manor. Whenever you ride in a new area you feel good to ride and explore the place. So I was cruising through the place with good speed. It was above 45km so I was checking the odometer constantly for the 50km reading because I had to return at the 50km mark to complete the 100km at Virar. Further a board read Tarapur and I knew I was close. Finally I reached the 50km point and the place was beautiful with rocky hills of different shapes all around. I was delighted to see the timing 1:34hrs which was 31.7km/hr. Then I took u-turn from there towards Virar. My body was feeling ok, everything was going fine. I decided to eat the sweet coconut bar early as I felt my stomach half empty. You have to eat before you get hungry or you’ll get bonked and energy will be zero to continue the ride, I have learned this from the previous years. I ate the bar simultaneously riding with the smooth speed of 25km/h. Throughout the ride I was suffering the combination of crosswinds and little headwinds.
But after 50km it got a bit intense. Ride to the 60km mark was intense because of the cross wind and rolling hills. And at 62km mark there was uphill of Varai which asked a lot out of my foot and the ankles and the sun adding up. I decided to take a power break in the shadows of the small tree near the road. I waited for less than 30seconds there to drink and free my ankles and back. That break proved good but short lived because my ankles and the base of the foot was still paining because of the soccer shoes. I couldn’t afford the cycling shoes so I bought soccer shoes for cycling as it has stiff base. If only I had cycling shoes my timing would have been better.
After 62km I lost a little hope that I won’t be able to complete the ride in some respectable average speed of 30km/h which was my target after a long time I went to a long ride. Previously my average speed for long distance was about 28km/h. But I know I had improved since then, so anything less than 30km/h would depress me. I was then riding at the constant speed after the downhill of the Varai not putting too much effort. Too much effort would mean my foot getting more sore leading to too low speed later. Somehow I pushed myself hard. The body demanded too much water in the heat so the bottle became empty. Then after around 78km I found a shop near the highway and I bought a bottle of thumbs up as I felt it would be more energizing as it contained caffeine. The idea of thumbs up over water was good at the hindsight. It also gave my foot relaxation for a while. I checked the odometer before leaving the shop to see whether there was still hope to gain good average speed. I was again delight to see that the average speed was around 30.7km/hr, so I kept going carefully with the pain in base of the foot and then in hands.
I was about to reach the junction of the Virar on the national highway.
My speed was low and there was 7km to go for the 100km. I had very less hope of completing the ride in good time because it was difficult rolling hills then after. So I checked the odometer of the last time and was surprised that my average speed was still marginally above 30km/h, around 30.7km/hr. Then the last 7km was completely adrenaline ride. I was too pumped up. It was me and my bike against the time. The speed was completely fluctuating between 25km/h to 40km/hr. I was riding so pumped up that I forgot all the pain in my foot and the hands. My only aim was to complete the 100km not less than 30km/hr.
I was finally reaching the 100km mark. It was 1km to go for 100km. Then I was constantly checking the odometer to read the 100km mark. Finally between the traffic I reached the 100km mark and took a long relief breath and checked the odometer for average speed. I was very happy to see the average at 30.4km/hr. It was the new milestone for me. I completed 100km in 3hours and 17mins.
It may not be that great, but for me it is and one inspirational day for the future because at 60km I was struggling and I thought it would be that day again where I would procrastinate the personal benchmark, I would have stopped and rested or I would have ridden slow to reach 100th km by the average speed of 25km/hr. I will always remember this day as one for the future. On this day I struggled but never gave up and kept hoping for the best.
—–Miles Mukundan. 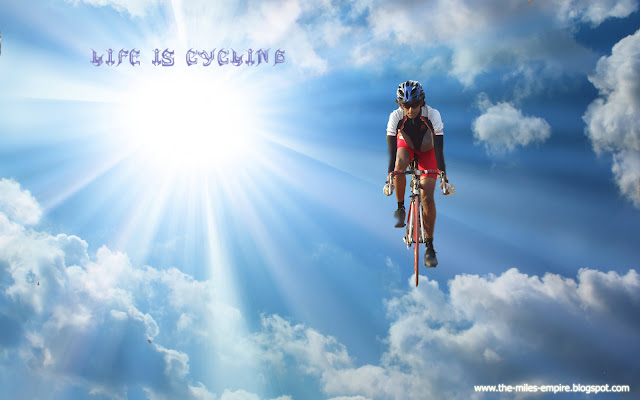