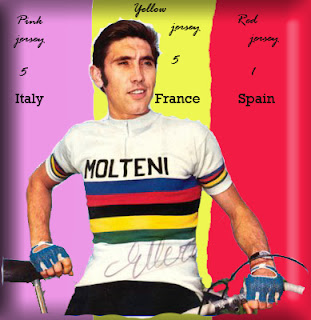 Ask any cyclist or cycling fan in the world that who was and remains the best cyclist in the world and the answer will undoubtedly be Eddy Merckx and if not then the person must be biased. Ask a pro cyclist or an immature enthusiastic amateur cyclist – How would you like to live your life? and his answer would be, like that of Eddy Merckx. What Eddy Merckx has done is beyond human tendency and hence he got the nick name ‘the cannibal’. He has raised the bar so high, reaching it is like almost impossible. Hence he is one of the most respected person in the cycling world.
He excelled in all the fields of cycling – time trial, climbing, breaking hour record and even in track racing.